We are reflecting on the years the EAC has spent collecting and preserving life stories of expatriates worldwide and celebrating people who have played an important role in making the EAC what it is now. The following text is written by an archival donor who chooses to remain anonymous. Read also the reflections from an EAC researcher and two EAC volunteers. 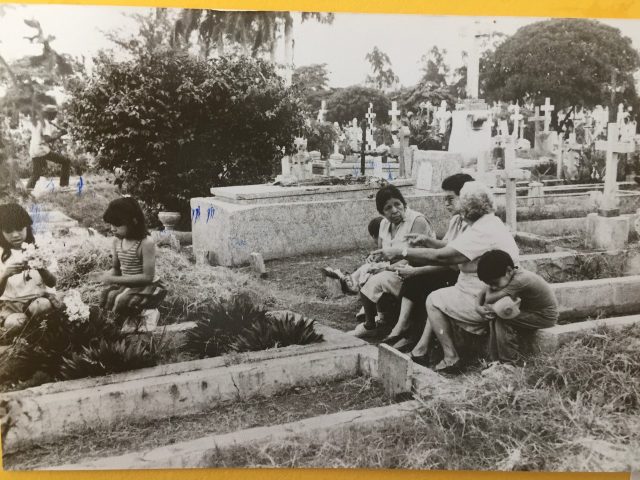 A photo taken by the author in a cemetery in Managua, Nicaragua, on the occasion of Día de los Muertos, or Day of the Dead. Expatriate Archive Centre: AN.2019.25.

Why did I decide to donate my formal and personal archive to the Expatriate Archive Centre when I die? A simple reason is that I love reading (auto)biographies. Some aspects of my life may therefore be of interest to others. Another is that I chose not to have children. At the time of signing the donation agreement, neither did I have a partner. Nor do I have relatives interested in the documents. So, when I die, everything would be thrown away otherwise.

Now what is this ‘everything’? It holds a comprehensive collection of documents and photos that give an overview of my studies, work, background, and the widely divergent activities of my life, as well as my intimate relationships, friendships and family relationships. Here are just a few examples of what I’m donating: Hard drives containing extensive documents and personal correspondence. About 100 articles that were published, as well as many that weren’t, five books that were published, and several that have not been so far. Also: policy papers and project proposals I wrote; promotional material I designed for the courses and workshops I developed and gave; advertisements I placed; letters, emails, WhatsApp messages to and from organizations and institutions; the editing board of a magazine I was a member of; newspaper and magazine clippings; personal messages to friends, lovers, and loved ones; over 80 personal diaries; and a large number of slides, videotapes, and photographs.

The collection covers a broad range of topics that capture an era. Or several eras, to be more precise. I started out my career as an intercontinental flight attendant at KLM, which gave me an opportunity to get a glimpse of the (non-western) world. In the 1970s we would stay in Asia and Africa for five days before the change of crew on the next flight. Then working at public utility companies to pay for my studies, attending meetings that were a prelude to the internet, and participating in the policy development for sustainable power and heat generation in the 1970s. Giving my first lectures and tours in this context and the first articles I published.

The collection also covers activities I undertook during my student days. My activities in social movements, in different countries, in different periods, set against my personal concerns about the world around me. My personal diaries show how I conquered insecurities and fears, what I found difficult, and what made me happy. Other documents describe my low-budget backpacking trips for months at a time through Asia and Latin America with a girlfriend in the 1970s and 80s, before the age of internet and mobile phones or ATMs, when the tourism industry was still in its infancy.

It also captures my time as a student in the United States during the Vietnam War and how I accidentally ended up as President of the International Club. Many years later I was working in Nicaragua in the 1980s during the ‘Contra War’, with the United States supporting the Contras on the one side and the Soviet Union and Cuba supporting the Sandinistas on the other side. My documents and photos show the work I did doing intensive field research, trying to sleep under threat of gunfire, dodging machine guns a few meters away. Being invited to work at a research institute in Managua, then to set up a gender research department, and finally establishing a new research institute with Nicaraguan colleagues. The documents provide information on the SNV Field Council, of which I was part, proliferating policies that would benefit the poor.

I worked for a number of organisations at different international levels and was finally contracted by the Dutch Ministry of Foreign Affairs. The documents I leave to the EAC include lectures and workshops I gave, courses I developed and taught both to Latin Americans as well as the Dutch. They also speak to the friendships that came out of my work, being the only foreigner in a Nicaraguan context. Friendships which differed from the friendships in the Netherlands. To finish work spending nights sleeping on our desks at the office with colleagues because it was too dangerous to walk the streets at night. At fieldwork not knowing whether we’d be able to return home because petrol was scarce and the roads were not safe because of the war. The Encuentros of women we organised despite all these risks, also in other countries of Latin America including Mexico and Central America. How polarisation was everywhere, in work, friendships, in families.

The articles and books I wrote about these circumstances, refer to my personal situation as well to what we learned during our field research. We proposed a new research approach which would be of direct significant for people in trouble.

Then returning to the Netherlands after many years. How hard it was to readjust and to get into totally unexpected traumatic situations. Ending up with a complex PTSD, not because of the war I left behind, but because of abuse by a female psychotherapist in the Netherlands. This turned out to be the start of doing research in new fields of interest. I happened to run into other survivors of abuse by health care practitioners and I started doing in-depth research in the Netherlands about abuse by female health care practitioners. I saw and lived the huge trauma this can cause in people. Yet despise this major backlash in my life, I was amazed by my own resilience and that of other traumatised people I interviewed and supported who had had similar experiences. It led me to dive into another research area, which was how to recover from deep trauma when you no longer trust anyone. What methods were available, in formal and less formal health sectors, which could help me out and other survivors of this kind abuse? This participative research into healing methods brought new perspectives to my life. For more than two decades I supported survivors psychologically, mentally, juridically, and generally voluntarily since all of us lost our jobs and income. I found new ways of relating to myself and others, and actually deepened my understanding of my past work in Central America and the survival strategies of people there, here, now, and also including my parents’ survival of the Second World War. Three books are the witnesses of what I learned during these research processes.

Passing on this build-up practice and knowledge I worked with refugees from Rwanda, Burundi, and Congo in the Netherlands, providing courses and training on ‘Trauma and Development’. The collection contains the lectures and courses I gave on this topic, also to other organizations and the articles I wrote about it. In retrospect it shows how I started to understand how deeply trauma influences the characters of people, both in Western as well as non-Western countries. It clarified why it is so difficult for development projects to have a long-term effect, and how and why social movements can make a difference.

My personal archive is a showcase of how time changes. When connecting with young people in my country and with people with roots in other countries who now live in the Netherlands, my personal history shows how much the Netherlands has changed since I was young, how much the world has changed. What initiatives we took to change the world, what parallels pop up with today’s world, and their differences.

Looking back at my life, I spent more time doing voluntary work than paid work. It still amazes me how I managed to survive financially. My archive reflects how much I learned from working, studying, and living in different countries. It captures my life as a woman during all of this time. It shows not only HIStory but also HERstory, and how social movements were greatly inspiring and why. There were periods with a partner and without, and my diaries show how my perception of love relationships changed in the course of time. It shows also how my entire worldview shifted from the socio-critical years at the end of the previous century to a more spiritual worldview in the current one, and why. What experiences led to this shift. The archive contains serious matter but also funny anecdotes.

My collection reflects my life as a researcher in the first place, in very divergent fields. This attitude of being curious about the world around me was first directed toward the outside social, economic and political world around me. Later my research focused on understanding others and myself at a deeper psychological and spiritual level. These changes in focus lead me to feeling connected to a wide variety of work fields, friends and lovers, and led me to get to know paths of inspiration that proved to become invaluable resources to me.

Leaving my archive to the EAC may be of interest to any researcher in the future. This may include family members who are still young now, or anyone in future generations who may appreciate it as a source of inspiration to their lives.

- In memory of Yolanthe Smit, who led me to the EAC.

Go Back
Categories: Articles, Donations
We use cookies on our website to give you the most relevant experience by remembering your preferences and repeat visits. By clicking “Accept”, you consent to the use of ALL the cookies.
Do not sell my personal information.
Cookie SettingsAccept
Manage consent

This website uses cookies to improve your experience while you navigate through the website. Out of these, the cookies that are categorized as necessary are stored on your browser as they are essential for the working of basic functionalities of the website. We also use third-party cookies that help us analyze and understand how you use this website. These cookies will be stored in your browser only with your consent. You also have the option to opt-out of these cookies. But opting out of some of these cookies may affect your browsing experience.
Necessary Always Enabled
Necessary cookies are absolutely essential for the website to function properly. These cookies ensure basic functionalities and security features of the website, anonymously.
Functional
Functional cookies help to perform certain functionalities like sharing the content of the website on social media platforms, collect feedbacks, and other third-party features.
Performance
Performance cookies are used to understand and analyze the key performance indexes of the website which helps in delivering a better user experience for the visitors.
Analytics
Analytical cookies are used to understand how visitors interact with the website. These cookies help provide information on metrics the number of visitors, bounce rate, traffic source, etc.
Advertisement
Advertisement cookies are used to provide visitors with relevant ads and marketing campaigns. These cookies track visitors across websites and collect information to provide customized ads.
Others
Other uncategorized cookies are those that are being analyzed and have not been classified into a category as yet.
SAVE & ACCEPT