On 19 June 2019, Expatriate Archive Centre staff, volunteers, and interns were treated to a restoration workshop at and tour of the Rotterdam City Archives (Stadsarchief Rotterdam). Simon Taylor is an intern at the EAC and a master’s student of heritage and memory studies at the University of Amsterdam.

I can honestly say that I didn’t know quite what to expect when I headed up to visit the Rotterdam City Archives (Stadsarchief Rotterdam) on June 19, accompanied by several other members of the Expatriate Archive Centre team. I had seen archives outside of the EAC, but I had never had a chance to go inside one of this scale. There are 42 kilometres’ worth of archives stored within the building, which documents ranging from the present day all the way back to the 1200s. Being given a private tour of both the collection and the restoration facilities was truly exciting, both from the perspective of someone doing archival work and from that of an amateur historian who finds Dutch history consistently fascinating.

The first half of the tour was focused on the ways in which the Rotterdam City Archives goes about preserving and restoring items in their collection. We were shown into a large, sterile room that reminded me of my old chemistry classroom. The primary project our host was working on was a collection of advertisements from the Rotterdam-based seller of tea, coffee and cigarettes Van Nelle, which has been in existence for over two centuries. As an example, we had a look at a mid-20th-century poster advertising Van Nelle cigarettes. Since the advertisements were mass-produced and never meant to last, the quality of the paper was low, which in turn meant that many were damaged. This particular poster had suffered significant creasing, as well as a few minor tears. The tears were mended with a mix of Japanese tissue (kōzogami), starch and, in some cases, thermoplastic glue. For the creases, a delicate ‘conservation iron’ was used, while an enormous press was used to ensure the paper stayed flat. After all that was done, it would be digitally scanned in-house. The whole process was demonstrated to us, and the care and precision that was involved was truly impressive. 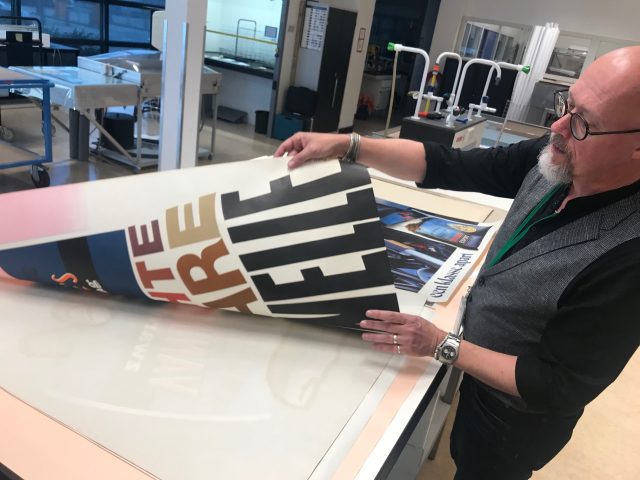 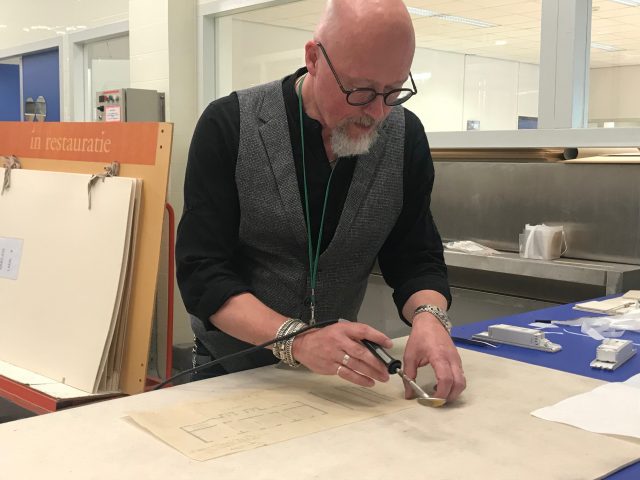 We were also introduced to the process of preserving photographs. The specialist in charge of this showed us some of the photographic negatives she had been working on, which were also donated by Van Nelle. Many of these negatives were celluloid and therefore made use of nitrate, which is highly flammable. As she explained, the specialist had to take great care in storing these negatives: not only were they kept in cool storage to decrease the risk of combustion, they were also held in envelopes which were in turn held inside cardboard boxes. They used this method (as opposed to plastic folders) to avoid the gas that is released from celluloid negatives from becoming trapped, as this would permanently damage the film. 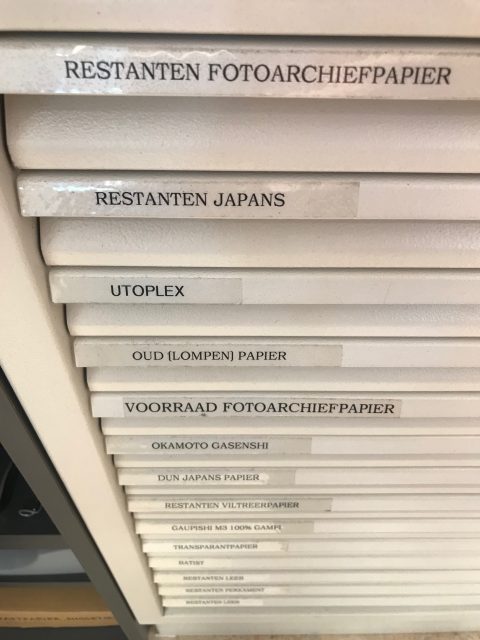 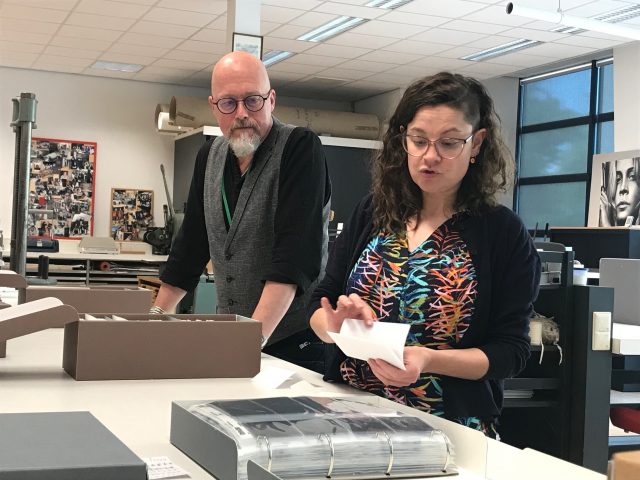 When dealing with photographic negatives, essentially all damage is permanent; this must surely add an element of pressure when it comes to their preservation. Permanently losing some of these pictures would be a real shame as many provide unique insight into the lives of people who are too often ignored. A good example of this is the images of migrant workers — mostly from Spain, Morocco and Greece — labouring for Van Nelle. Such people are easy to forget when telling the history of a company, yet these workers were integral to its success.

After we left the restoration room, we took the stairs up to the repository. The space was massive, with seemingly endless rows of shelves, draws and filing cabinets stretching off into the distance. A small corner of the room, sealed off by a white curtain, was devoted to parchments. These parchments, which were all centuries old, were stored in clear polyester film sleeves and hung from above like shirts on a hanger. Given our limited time there, our guide had to be very selective about what he showed us, but I can honestly say that I was profoundly impressed. We saw the document granting Rotterdam city rights, signed by William II, Count of Hainaut in 1340. Alongside it was a 1940 ultimatum from Nazi Germany informing the Dutch if they do not surrender, that the Luftwaffe will begin bombing the city of Rotterdam — what we know today as the Rotterdam Blitz. To see documents of such profound historical importance in such a private context felt like a real privilege. 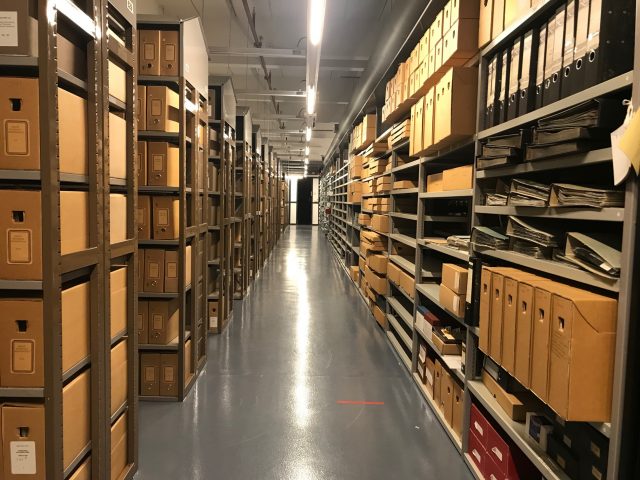 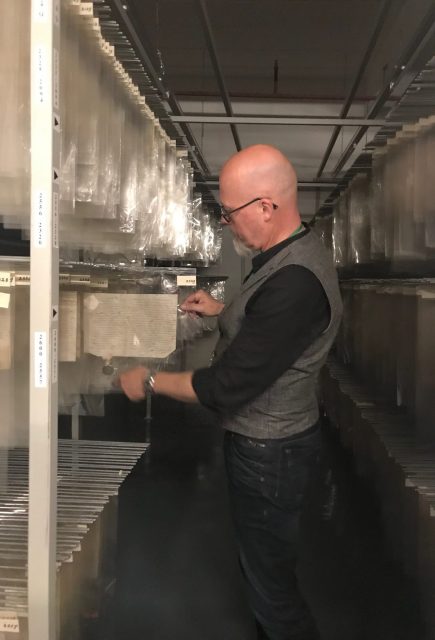 I left the Rotterdam City Archives with a big smile on my face, but also with a renewed appreciation for the importance of archiving. In its long life, Rotterdam has experienced many catastrophes, be they as a result of disease, religious conflict, or military conflict. In the midst of these periods of chaos, it is easy for stories to become lost, and when they are the result will invariably be a poverty of historical understanding.

The work of the EAC helps preserve the stories of expatriates, stories that might otherwise be forgotten. While the scale of the Expatriate Archive Centre is significantly more modest than that of the Rotterdam City Archives, there is a shared desire to ensure that stories are kept safe from the ever-turbulent events of the world so that they may be used to enrich the understanding of future generations.