Mathilde Bernard was an intern at the Expatriate Archive Centre from February through April 2019. She recently earned her master’s degree from Erasmus University of Rotterdam in Global History and International Relations. This is her first in a series of articles covering Dutch expatriates living in mid-20th-century Nigeria.

I would like with this article and others that will follow to discuss the way Dutch expatriates in Nigeria in the late 1950s and 1960s kept a tie with their home country. This first article focuses on expatriates’ home interiors. The title of this article was taken from the introductory sentence of the Dutch ethnologist Hester Dibbits’ article about migrant interiors, social class, and ethnicity. The article highlights how the way people furnish their interiors is a reflection of their identity as much as it shapes their identity. I wish to echo this idea by analysing the significance of Royal Dutch Shell expatriates’ home interiors while they were posted in Nigeria.

At the time, as travel was more complicated, people could not bring a lot of their own furniture and items with them while posted overseas. This explains why the houses in which expatriates lived were often pre-furnished by Shell. In figure 1, we can see some pictures from a Dutch interior in Nigeria. While looking at these pictures, it is impossible to say that these had been taken in Nigeria. The interiors are composed of Western-style furniture that do not really echo the host country or its typical home environment. As the anthropologist Erik Cohen pointed out, expatriates have a tendency to create a “sui generis lifestyle” which does resemble neither their origin nor host country, but which is typical to Western expatriates around the world. This Westernised unification of interiors can be seen as an attempt to help expatriates settle more easily in different environments that looked similar despite their distinct localisation. As stated by Cohen, expatriates’ interiors can give the illusion that expatriates never really left their home. They are made to provide a sense of continuity with the life they used to live back home. The inside of the house allowed the expatriates and maybe, more importantly, their wives and children — who were the ones spending most of their time inside the camp — to “think as usual” and not have “to cope with the problems posed by a strange environment”. 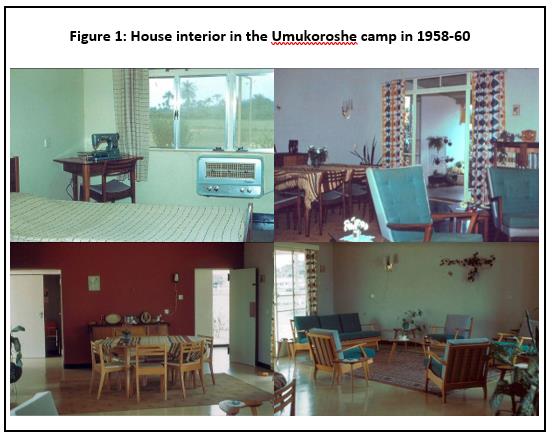 This ability of the interiors to allow expatriates to “think as usual” resonates with what Dibbits has highlighted in her article about the significance of sedari — the traditional Arabic couch — for Dutch-Moroccan migrants. One of the main features of this couch was its ability to transport people to other places. Dibbits recounts the strong emotions that Dutch Moroccans had toward the piece of furniture: it allowed them to, for an instant, feel like they were back to Morocco, to their old domestic life. However, Dibbits also remarks that it does “not just transport people to Morocco, but rather to a romanticized ideal of Morocco”. Often the tentative recreation of a certain environment leads to the creation of a new environment. As Cohen has stated, “home is not an exportable commodity”. It is not possible to recreate “home” abroad since what makes someone feel at home is not only the material context, like the furniture, but also the social context “which, by definition, cannot be transposed into the host environment”.

However, in figure 2, a picture of a children room, it is possible to perceive some personal items. These are particularly interesting to the extent that they were placed in the children’s room and thus were likely to be carefully chosen by the parents for their children. In this picture, it is possible to see the usual children toys: two little white dolls and a white baby in his trolley. However, one element is particularly interesting, the poster on the wall of Sinterklaas surrounded by two Zwarte Pieten. Through this poster, the parents take the role of social memory transmitter. This idea of transmission of social memory “emphasises the importance of social groups in creating frameworks for remembering — for example, the role of the family in transmitting memory” as explained by Sharon Macdonald. Here the parents draw importance to the figure of Sinterklaas as a symbol of their Dutch culture that they want to transmit to their children. In this context, the transmission happens thus in a more private sphere which is the one of the family. However, Sinterklaas as a celebration often took place also in the public sphere reuniting not only the nuclear family, but more broadly the Shell family. 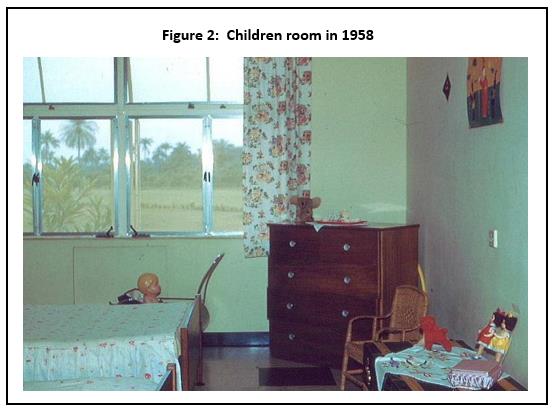 This last example shows that the transmission of their own national culture to their children seemed particularly important for expatriates. However, another important concept explored in this article is the one of sui generis lifestyle. Expatriates have a tendency, as we see, to create a quintessential expatriate lifestyle that is singular in the sense that it does not resemble to the one they had at home or to the one the population from the country they are living in has.

Repeated efforts have been made by the author to confirm permission to use the photos in this article. If you own the copyrights to any of the images above, please contact us at welcome@xpatarchive.com.